NASA Inventions that have improved our lives.

In 1962, NASA created the Technology Utilization Program which allowed collaboration with the scientific community to develop inventions related to space exploration.

Many of the technologies developed for the aerospace program have been used to manufacture commercial products.

Perhaps the most well known of NASA Inventions is temper foam. Charles Yost was an aeronautical engineer involved in constructing a recovery system for the Apollo command module.

He developed a foam for protecting crash victims. It had very unique properties for absorbing energy.

Temper foam is a soft cushion-like material that has the capability of wanting to maintain it's form and structure when compressed.

It does this by pushing back at anything pressured against it. When the pressure is removed, the foam returns to its original shape.

This unusual characteristic is why the product is also known as "memory" foam.

The infrared thermometer is an invention that resulted from technology developed by NASA.

Glass thermometers use mercury that expands within a tube when heated. Markings along the tube indicate the temperature. This requires the thermometer to be inserted into a body cavity.

The infrared thermometer takes temperature from the eardrum within a couple of seconds. It measures heat by detecting infrared radiation and is faster, easier, safer, and more accurate than glass thermometers.

Infrared technology was developed by NASA to detect heat in outer space.

This is one of the NASA Inventions we don't see but we all use. NASA developed a coating to protect their equipment from debris in space.

The Foster Grant Corporation licensed the use of this coating to make scratch-resistant sunglasses. Today, this technology is used in most eyewear and protective facial shields. 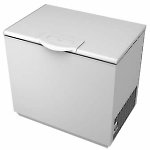 This 12v cooler was invented by NASA engineers.

David Bergeron and Michael Ewert invented their cooler after developing advanced refrigeration technology for NASA at the Johnson Space Center.

This advanced technology uses battery-free, solar power to refrigerate and air condition habitats in space such as the International Space Station.

It uses a non-toxic phase-change material that not only has exceptional freezing capabilities but is inexpensive and water-based.

NASA tested a prototype of the cooler in a hot, humid region near Houston, Texas for three years. It was used for refrigerating food, drinks and water.

Texas Southern University and New Mexico State University were permitted by NASA to test and evaluate the cooler. It required five hours of sunlight daily but it can store power and remain cold for a week without sunlight.

Besides the advantages of being green this 12v cooler is essential for locations that do not have access to electricity.

Most of the developing world and it's 2 billion residents have no access to electricity or refrigeration.

The cooler invented by Bergeron and Ewert has a 105 liter (3.7 cubic feet) storage volume, a locking door, and corrosion-resistant steel exterior and it works anywhere - even in outer space.

In 1999, the National Academy of Engineering published a report concerning the sponsorship of innovation for engineering and science.

In brief, it recommended that more be done to facilitate innovation.

In 2004, NASA began the Centennial Challenges, which were competitive contests that remunerated any inventor that discovered specific space inventions. For example, there was a contest to discover a new space glove that awarded $200,000 and another that awarded $2 million for a new lunar lander.

The United States Congress appropriates 10 million dollars annually to NASA for this contest. The Challenge engages the public in the process of advancing technology that results in solutions to problems of interest to NASA.

Participants may be independent inventors, groups or small businesses.

The 2012 Challenge proposes solutions to power beaming to a lunar rover, and launching a nano-satellite, among others.

The inventors who win these contests retain the rights to their space inventions as well as the opportunity to participate in the Agency's research and development programs.

© 2007-2020 Inventor Strategies Group. ™ All Rights Reserved. Trademarks, Service Marks, and Logos appearing on this site are the property of their respective owners.