The problem with wind turbines and wind power generators is capturing the wind. These new inventions seek to solve that problem.

Wind generators need to be elevated above ground level to avoid distorted airflow caused by buildings, trees, mountains, valleys and other impediments that obstruct wind.

A popular solution to this problem has been to elevate wind turbines on towers in order to capture "clean wind", which is faster and more consistent than ground air - typically generating 8X more power.

But building these towers is expensive and the impact on the landscape often requires a time consuming and frustrating process of obtaining regulatory permits.

Inventor Ben Glass has developed an alternative solution. His wind power generators float in the sky. His invention was the winner of the ConocoPhillips Energy prize awarded by Penn State University.

A hollow shaped helium tube floats in the sky tethered to the ground by a cable. The tube contains a propeller. Wind enters the tube and passes through a propeller which turns and generates electricity down the cable.

The helium tube is similar in design to unmanned blimps (aka aerostats), which have been used successfully for decades to carry radars, monitors and sensors in the sky for extended periods of time even during adverse weather conditions.

Unlike wind turbine towers, the process for obtaining regulatory permits for aerostats is well established, consistent and easier to obtain. 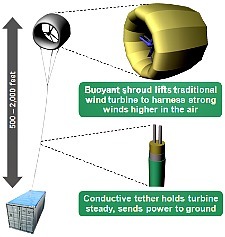 These floating wind turbine generators can be deployed and functional within a day - producing 100 kilowatts of electrical power every 24 hours and remain airborne for three months before replacing the helium.

Glass expects his wind turbine technology to be used in remote and rural locations but envisions his product being used to create offshore "floating wind farms" generating electricity for an underwater electric power transmission.

His invention focuses on how air travels over a rooftop. Similar to an airfoil on a wing of an airplane, air travels faster when it passes over the peak of a roof - about 3X faster.

Gregory designed cylindrical wind turbine generators that capture this fast moving air. These turbines, known as Ridgeblades, are 6.5 m in length and approximately 25 cm in height and are placed along the ridge on the peak of a roof.

The units are designed to be unobtrusive and feature benefits such as color-matching and vibration free, quiet operation that are necessary for urban planning approval - which have hampered the use of traditional rooftop wind generators.

Gregory, a former Rolls Royce turbine engineer, won the Postcode Lottery Green Challenge for his invention, which included a cash prize of approximately $750,000 (US).

The Postcode Challenge is an international annual competition that awards inventors for innovations that reduce greenhouse gas emissions.

The Bahrain World Trade Center is the first skyscraper to have wind turbines integrated into the structure of the building.

Three large wind turbines are suspended between two office towers. The towers are aerodynamically tapered to funnel wind and draw air into the turbines.

This airfoil tapering allows the wind to enter the turbines at a perpendicular angle and increases air speed as much as 30 percent in each of the 95 ft wide turbine rotors.

© 2007-2021 Inventor Strategies Group. ™ All Rights Reserved. Trademarks, Service Marks, and Logos appearing on this site are the property of their respective owners.