The popularity of 3d television has been slowly increasing in popularity, however many consumers would prefer 3d tv without eye-wear.

Wearing special 3d glasses is a deterrent for many consumers because the eye-wear is uncomfortable for some and unnatural for others.

For example, you need multiple pairs of glasses for your friends and family if you want them to watch television together.

This is like having your family and friends wear special clothing to ride in your car.

It may be novel but it will never gain wide acceptance.

The television industry has been developing new television technology so you can watch 3d without glasses. 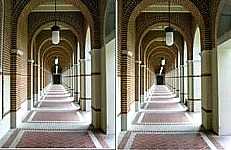 We naturally see things in stereo with our eyes, with each eye viewing a different angle of an object. Seeing different angles of an image allows us to create 3d imagery in our heads. The two images (below) show two angles of a hall.

To allow us to see different angles of the same image, so we can see 3d without glasses, gaming devices such as the Nintendo 3DS use "parallax" display screens.

This technology consists of a surface coating on the screen that has a series of vertical lines.

These lines are approximately a pixel in width so you can't see them. Behind the surface, the screen shows two images. The images are two viewing angles of the same image.

The surface coating only allows light from one image to be directed towards your right eye, and light from the second image to go to your left eye.

This technology works well for small gaming devices and smartphones but not for larger television screens. When you move your head outside of the "sweet spot" or viewing angles, the 3d effect doesn't work.

Consumers are not comfortable with this restriction when watching their television sets. For example, they would have to crowd family and friends together to watch 3d television.

Sony has also developed a "lenticular" sheet of film (3mm thick) that can be adhered to laptop screens.

Accompanied by image processing software and facial tracking technology, it can project 3D images at distances ranging from 12 inches (30.4 cm) to 39 inches (99 cm) at viewing angles from 60 to 120 degrees.

In the production of 3d digital media, there has always been a problem filming multiple angles of images from different cameras to create life-like 3D images.

This is because all camera positions and angles require the same focal length and optical axes. Television technology now exists that calibrates and syncs multiple cameras to solve this problem.

Affordable and convenient 3d television for consumers, without 3d glasses, is still a few years away. But 3D digital sign advertisers are beginning to use the latest advancements in 3d technology.

Most likely, digital advertising displays in shopping malls, and commercial centers, will be the first places you will see large screen 3d tv without 3d glasses.

Consumers will eventually see this television technology in their homes when it becomes affordable.