Blue jeans were invented in 1869 by Jacob Davis.

Davis owned and operated a tailor shop in the small railroad town of Reno, Nevada. He made horse blankets and wagon covers for railway workers on the Central Pacific Railroad.

Unfortunately his inventions weren't successful because he couldn't convince any investors or companies to get involved.

One day, a customer came into his tailor shop complaining about a problem she had with her husband. The problem wasn't so much with her husband as it was with his pants.

The woman explained that her husband was a big man who cut wood along the railway and his pants just wouldn't last.

She asked Davis to make her strong pants - something that wouldn't pull apart at the seams. She even offered to pay Jacobs $3 a pair - a large sum for pants at the time.

He also reinforced the pockets and seams with the same copper rivets he used for attaching straps to horse blankets.

The pants were a huge success. Word spread quickly and orders came into his shop just a fast.

Davis, being the experienced inventor that he was, knew he needed more resources. He approached the company that supplied him with textiles - Levi Strauss & Company in San Francisco.

Jacob wrote a letter to Levi Strauss telling him about the success of his new pants and suggested a business proposal.

Eventually, the two men came to an agreement to patent, manufacture and distribute the pants, which became known as Levi jeans.

Jacob's invention was patented on May 20, 1873. The patent wasn't for denim material but for how rivets were used to reinforce pant and pocket seams.

To the left is a picture of the label that was sewn on the jeans.

It shows the company's trademark of two horses trying to pull apart the jeans - a symbol of strength.

Manufacturing processes evolved over the years to make jeans worn-looking, softer and more flexible, which appealed to a greater number of consumers.

Today, the average American owns seven pairs of jeans. Last year, $13.8 billion dollars worth of blue jeans were sold in the United States. which definitely makes this invention one of the 5 American inventions that you're wearing.

The zipper was invented in 1891 by Whitcomb L. Judson, a mechanical engineer from Chicago.

Judson had numerous inventions and patents. Most of his inventions were related to a pneumatic street railway technology to operate streetcars using compressed air.

This technology was impractical at the time because of the difficulty making air tight seals.

Judson's most famous invention was his "clasp locker" - a faster and easier way to tie and untie boots.

It was a series of interlocking hooks that could be engaged or disengaged with the single continuous movement of a tab. It was the first functional zipper.

Sales of the "clasp locker" were slow and garment manufacturers complained that the interlocking hooks pulled apart too easily.

So Judson hired Gideon Sundback, an electrical engineer, to make improvements. Judson created two rows of continuous teeth that were shaped into dimples and scoops that clamped together with a slider.

The B.F. Goodrich Company decided to use the fastener on rubber boots they were marketing.

They named the fastener a "zipper" because of the sound it made when closing and opening (known as onomatopoeia - a word the imitates or suggests the sound that it describes such as "oink" or "meow").

Zippers didn't quite replace laces in boots but they did become very popular in jackets. So zippers are included in our list of 5 American inventions that you're wearing.

Nylon was invented by Wallace Carothers on February 29, 1935 while working for the chemical company Dupont.

The laboratory was devoted to speculative research to better understand fundamental chemical principles. It was known as "Purity Hall".

Carothers was teaching organic chemistry at Harvard University, when Dupont pursued him and others to work at their facility. The laboratory was eventually staffed by a small group of brilliant Ph.D chemists.

During his research at the laboratory Carothers discovered a synthetic thermoplastic fiber. He called this new fiber "Polyamide 66".

The material was made from readily available ingredients and possessed desirable properties. It was like silk but rugged, durable and resistant to tears, water, heat, mildew, mold, and chemical damage.

The new synthetic fiber was first introduced in 1938 as bristles in toothbrushes.

In 1940 it was promoted at the New York World's Fair as a new fabric for women stockings and was named "nylon". 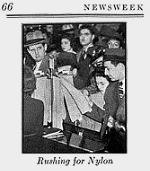 Originally, the name "no-run" was considered to emphasize the fabric's resistance to "unraveling" or "running". But it sounded too much like "neuron" so they substituted some letters and came up with "nylon".

The new hosiery, known simply as "nylons", went on sale in department stores throughout America on 15 May, 1940.

In the first day, 5 million pairs were sold. The average price was $1.25 a pair.

Nylon hosiery looked and felt like silk - but it was cheaper and better - it was machine washable - didn't need ironing - and resisted tearing. Woman loved them.

Nylon fabric was also in demand to support the war effort. It was used to manufacture parachutes, tenting, outerwear and other military material.

Today, the use of nylon is extensive - flags, guitar strings, tires, machine parts, gun handles, sutures .... and clothing, which makes nylon one of the 5 American inventions you're wearing.

Ernest G Rice invented pantyhose in 1956 and was issued a patent entitled, "Combination Stockings and Panty."

The popularity of silk stockings and nylons necessitated the use of garter belts and fasteners. These accessories caused unsightly seams and unwanted stress on garments.

Rice's invention combined underpants and stockings as a single garment thereby eliminating the need for belts and fasteners.

Styles of pantyhose using elastic fabric to shape and enhance woman's figures replaced the use of girdles.

Spandex was invented in 1959 by Dupont chemists, C. L Sandquist and Joseph Shivers.

The fabric is a soft, rubber-like polyester that has unique properties. It can regain its shape after being stretched 600% of its original size.

It is lightweight and blends easily with other fibers.

Spandex doesn't deteriorate when exposed to oily skin, perspiration, lotions, soaps or detergents. Originally known as fiber "K", the name was changed to "spandex", which is an anagram for the word "expands".

Spandex is used in sportswear, undergarments, hosiery, shapewear and swimwear. Future uses include footwear and bedsheets.

Dupont's trade name for spandex is Lycra. Revenues from this invention exceed 1.5 billion dollars each year.